Our custom developed BlanketBlend fabric combines the comfort of cotton, with the performance features of polyester finished off with a rare yarn & ButterWash process to create a super soft, durable hoodie for every occasion.

The Secret to The Softness Love it!! My new favorite sweatshirt!!

Couldn’t be happier with this purchase. Absolutely so cozy and comfortable! The only recommendation I would make and the only reason I did not give it five stars, is the limited sizing. It tends to run a little bit small and I like my sweatshirts big and oversized. A side of that my favorite sweatshirt!!

Loading...
Was this helpful?
L
Liz Reviewed by Liz
Verified Reviewer
Reviewing
BlanketBlend Hoodie
I recommend this product
Rated 5 out of 5

I got my sweatshirt in cotton candy and I loved it. It wasn’t the softest hoodie I could imagine but super cute and comfortable. I did lose the string and one metal cap on the end and then had an issue with stain removal and the company replaced it with a brand new glacier gray for me for the issues I had. The new one feels even softer and I’m in love with the color! The packaging is even better than with my first and I just have to say for such an investment, they really did stand behind their product. Thank you!

Loading...
Was this helpful?
H
Haley Reviewed by Haley
Verified Reviewer
Reviewing
BlanketBlend Hoodie
I recommend this product
Rated 5 out of 5

I truly do not know how they do it! This hoodie is so unbelievably soft! I live in hoodies and I can honestly say this is the softest hoodie that has ever touched my skin. It’s lightweight but it also keeps you at the perfect temperature. I want every single color!!

Loading...
Was this helpful?
L
Linna Reviewed by Linna
Reviewing
BlanketBlend Hoodie
I recommend this product
Rated 5 out of 5

I ordered two hoodies and was so excited to get them. When I opened the package I found that they had sent me the wrong color hoodie. Instead of the hazy black I had ordered I received the sapphire. No big deal, but I sent them an email to see if I could get the color I originally ordered. They immediately responded and let me keep the wrong color hoodie and are sending me the black color. SO NICE! Also the hoodies are amazing. So soft and comfortable. They are definitely my new go to hoodies. They are super high quality and washed well. The size small was perfect for me. I am 5'10" and 130 for reference. Will definitely order more in the future.

Loading...
Was this helpful?
S
Sarah Reviewed by Sarah
Verified Buyer
Reviewing
BlanketBlend Hoodie
I recommend this product
Rated 5 out of 5

I love this hoodie! It is soft, but not too bulky or hot and perfect in the summer when it gets a little chilly at night. My only complaint is that I wish I had sized up because the elastic at the bottom is a little snug. I ordered a L thinking it would be plenty big because I typically wear a S/M in the top, but I would order the XL in the future for a looser fit. I love this product and would highly recommend!

Its true what others have said, this is the softest hoodies. It is so comforting to wear that you wanna wear it every time you go out. I work in a warehouse and thought I would get all hot and sweaty but I didn't! It was just right. I got the bundle one with two hoodies. Good deal!! Thing is I wish they would own up to the mistake they made. I chose Hazy Black as the color for one of my hoodies. When I receive it, it looked like nothing like the color advertised. So I reached out and at first they told that color variant no longer exists, then later said they didn't have that color in the first place and then later change their answer again to the color may look different due to lighting or how the picture was taken or how computer monitors display it. See for yourself with the pictures attached. That doesn't even come close to the tones that they advertised Hazy Black to be. They did offer to exchange it but at my expense. Now why would it have to be at my expense if I didn't made the error. Oh update, I just realized after looking at the all the colors available, they actually sent me Sapphire instead of Hazy Black. The Sapphire color has like a lighter tone than the Hazy Black. I reached out again and mentioned this and now hoping they would finally fix this. Other than its a great hoodie. 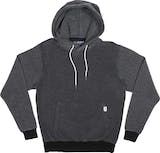